Danny Elfman is an incredibly prolific composer. His hits as a pop artist (with his band, Oingo Boingo) include “Dead Man’s Party” and “Weird Science.” He also works as a film composer for many notable films, the most recognizable including Alice in Wonderland (2010), The Nightmare Before Christmas (1993), and Batman (1989) 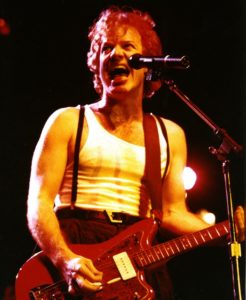 Elfman has composed for dozens of films, including major blockbuster hits such as Batman (1989), Mission Impossible (1996), and many of Tim Burton’s films including; The Nightmare Before Christmas (1993) (for which he also provided the singing voice for main character, Jack Skellington), Sleepy Hollow (1999), Corpse Bride (2005), Alice in Wonderland (2010), and many others. He has been nominated for dozens of awards from the Golden Globes, Grammy’s, and several Emmy’s (including one for his 1990 theme for The Simpsons TV show).

Elfman suffered from hearing loss during his time performing with his rock band, Oingo Boingo. He left the band after 20 years, to prevent further damage. He can tolerate live orchestral music, so he occasionally performs in front of an orchestra, in addition to scoring and recording.